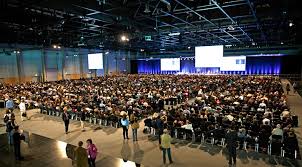 Dr. Pietro Invenizzi presented preliminary results from a phase 2 (early stage of development) clinical trial on a possible future treatment for PBC, GKT831. At this time, 92 patients have completed 6 weeks of treatment and a reduction in biochemical markers of cholestasis was observed. The treatment appeared to be well tolerated with no signs of itch or fatigue. The novel thing about GKT831 is that it is focused on targeting liver scarring, which differs to some other drugs for PBC that are more focused on bile duct injury.

Summary slide from presentation by Dr. Pietro Invenizzi on GKT831.

Dr. Velimir Luketic presented results from a trial of two doses of elafibranor, another potential future treatment for PBC. This study reported that both doses of elafibranor reduced blood markers of cholestatis and improved lipid health. Elafibranor was well tolerated and was not associated with itch. This drug is moving towards a phase 3 trial (the stage just before it might be launched for sale).  The way this drug works is similar to drugs like Seladelpar (already a late stage trial in Canada recruiting now) and Bezafibrate (a drug sometimes given ‘off-label’ because it is not approved for patients with PBC).

Dr. Gideon Hirschfield presenting a summary of potential treatments for PBC in the future

Dr. Christophe Corpechot presented results showing that continued treatment with UDCA after liver transplantation lowers the chance of PBC recurrence and rejection of the new liver. This is interesting and mirrors what most Canadian patients get, which is now a continuation of UDCA after a liver transplant.

Lena Smets presented results showing that treatment with bezafibrate improved the effect of treatment with obeticholic acid in 16 patients. This combination of treatments showed positive effects on blood markers of cholestasis. In patients treated with obeticholic acid who reported itching, the introduction of bezafibrate decreased itch in more than 60% of patients. The combination of therapies was well tolerated. This highlights a possible treatment option for patients who do not respond to UDCA and obeticholic acid.  The future for PBC seems to be combination drugs and approaches that aim for patients to get as near normal tests as possible.

Dr. Marlyn Mayo presented results from an analysis of patients who received Seladelpar, a possible future treatment for PBC, as part of an ongoing phase 2 clinical trial. This analysis reported that Seladelpar improved blood markers of cholestasis in patients with cirrhosis and in patients without cirrhosis. Patients with and without cirrhosis both showed no increase in itch and Seladalpar was well-tolerated in both groups. These findings emphasize that Seladelpar is effective and safe in cirrhotic and non-cirrhotic patients. Seladelpar may be the next new approved drug for PBC; there is a big late stage trial ongoing now, which includes sites across the world and including in Canada.

Excerpt from Seladelpar presentation highlighting some of its important qualities

A session for doctors on how to manage their patients’ itch highlighted the impact that itch can have on patients’ quality of life. Approximately 35% of patients report persistent itch, either frequently or all the time. The current treatments for itch were discussed, namely cholestyramine and rifampicin. The positive effects of bezafibrate on itch were highlighted, which may be a new way to manage itch in the future.

Fiorella Murillo presented a decision-making framework that clinicians can use to decide when to refer their patients with PBC to a specialist. This may help better identify patients who need to be referred to a specialist.

Surain Roberts presented results about treatment goals for patients with Autoimmune Hepatitis from the Canadian Network for Autoimmune Liver disease (CaNAL). Stay tuned for PBC-related results from this national study in the future!

There were some noteworthy presentations not about PBC but which are of interest as they inform patients with PBC of things for the future.  First and foremost, the conference had a lot of new studies about a disease called non-alcoholic fatty liver disease (NAFLD).  This is going to be the most common liver disease worldwide because it is most often associated with being overweight. There were many talks about how to tackle this both through better awareness as well as lifestyle changes (diet and exercis
e). As this was a liver treatment conference, there were also results of trials of drug therapy.  For the PBC community, it is noteworthy that many of the drugs in development for PBC are also being developed for NAFLD, or at least the sub-group of patients with NAFLD who have inflammation and scarring in their liver. This is because the science behind inflammation in the liver seems to share similarities between different diseases.  Drugs such as Obeticholic acid, Seladelpar and the Genfit drug, all used in PBC either in clinic or in trials, are also being developed for fatty liver. In particular, we heard the interim results of trying Obeticholic acid in fatty liver and heard how there was evidence from a large study that the drug seemed to reduce liver scarring.

Other highlights from ILC were about rare disease research and how rare disease communities can work together to make progress. An extremely rare disease called porphyria got a lot of attention, because a trial reported really quite amazing results of a special therapy that stops the wrong protein from being made in these patients.  The results were dramatic and attracted global news.  This report prepared for the Canadian PBC Society by Surain Roberts & Fiorella Murillo

Initial assessment
• Ultrasound should be used to exclude other causes of cholestasis.
• Physical examination should be used to screen for hepatomegaly, splenomegaly and extrahepatic signs
of advanced liver disease.

Unexplained cholestasis
• Elevated ALP but AMA-negative (<1/40)
• Concern over, or presence of, autoimmune hepatitis

*Liver biopsy is rarely required for diagnosis in the correct clinical context; consider if disease-specific autoantibodies are absent, or concern over features of AIH or coexistent NAFLD.

Assess 1st line treatment response within 6–12 months
• Most biochemical response criteria have been validated as predicting long-term disease progression at 12 months from UDCA initiation.1 A 12-month period is conventionally used to assess biochemical response to UDCA, but it has been demonstrated that evaluation at 6 months may be equally discriminatory.
• Elastography should be used yearly to assess liver fibrosis. Elastography has been shown as one of the best surrogate markers for the detection of cirrhosis or severe fibrosis.1 It has also been demonstrated that liver stiffness measurements (as measured by elastography) of greater than 9.6kPa are associated with a 5-fold increased risk of liver decompensation, transplantation or death.3 However, the ability of elastography to predict disease progression in PBC requires further validation.

Abbreviated Prescribing Information
Presentation: OCALIVA supplied as film-coated tablets containing 5 mg and 10 mg obeticholic acid.
Indication: For the treatment of primary biliary cholangitis (also known as primary biliary cirrhosis) in combination with ursodeoxycholic acid (UDCA) in adults with an inadequate response to UDCA or as monotherapy in adults unable to tolerate UDCA.
Dosage and administration: Oral administration. Hepatic status must be known before initiating treatment. In patients with normal or mildly impaired (Child Pugh Class A) hepatic function, the starting dose is 5 mg once daily. Based on an assessment of tolerability after 6 months, the dose should be increased to 10 mg once daily if adequate reduction of alkaline phosphatase (ALP) and/or total bilirubin have not been achieved. No dose adjustment of concomitant UDCA is required in patients receiving obeticholic acid. For cases of severe pruritus, dose management includes reduction, temporal interruption or discontinuation for persistent intolerable pruritus; use of bile acid binding agents or antihistamines (see SmPC).
Moderate to severe hepatic impairment: In patients with Child Pugh B or C hepatic impairment, a reduced starting dose of 5 mg once weekly is required. After 3 months, depending on response and tolerability, the starting dose may be titrated to 5 mg twice weekly and subsequently to 10 mg twice weekly (at least 3 days between doses) if adequate reductions in ALP and/or total bilirubin have not been achieved. No dose adjustment required in Child Pugh Class A function.
Mild or moderate renal impairment: No dose adjustments are required. Paediatric population: No data. Elderly: No dose adjustment required; limited data exist. Contraindications: Hypersensitivity to the active substance or any excipients. Complete biliary obstruction. Special warnings and precautions for use: After initiation, patients should be monitored for progression of PBC with frequent clinical and laboratory assessment of those at increased risk of hepatic decompensation. Dose frequency should be reduced in patients who progress from Child Pugh A to Child Pugh B or C Class disease. Serious liver injury and death have been reported in patients with moderate/severe impairment who did not receive appropriate dose reduction. Liver-related adverse events have been observed within the first month of treatment and have included elevations in alanine amino transferase (ALT), aspartate aminotransferase (AST) and hepatic decompensation.
Interactions: Following co-administration of warfarin and obeticholic acid, International Normalised Ratio (INR) should be monitored and the dose of warfarin adjusted, if needed, to maintain the target INR range. Therapeutic monitoring of CYP1A2 substrates with narrow therapeutic index (e.g. theophylline and tizanidine) is recommended. Obeticholic acid should be taken at least 4-6 hours before or after taking a bile acid binding resin, or at as great an interval as possible. Fertility, pregnancy and lactation: Avoid use in pregnancy. Either discontinue breast-feeding or discontinue/abstain from obeticholic acid therapy taking into account the benefit of breast-feeding for the child and the benefit of therapy for the woman. No clinical data on fertility effects. Undesirable effects: Very common (≥1/10) adverse reactions were pruritus, fatigue, and abdominal pain and discomfort. The most common adverse reaction leading to discontinuation was pruritus. The majority of pruritus occurred within the first month of treatment and tended to resolve over time with continued dosing. Other commonly (≥1/100 to <1/10) reported adverse reactions are, thyroid function abnormality, dizziness, palpitations, oropharyngeal pain, constipation, eczema, rash, arthralgia, peripheral oedema, and pyrexia. Please refer to the SmPC for a full list of undesirable effects.
Overdose: Liver-related adverse reactions were reported with higher than recommended doses of obeticholic acid. Patients should be carefully observed, and supportive care administered, as appropriate. Legal category: POM Marketing authorisation numbers: EU/1/16/1139/001 & 002
Marketing authorisation holder: Intercept Pharma Ltd, 2 Pancras Square, London, N1C 4AG, United Kingdom Package quantities and basic NHS cost: OCALIVA 5 mg and 10 mg £2,384.04 per bottle of 30 tablets. Date of revision: 11th April 2018